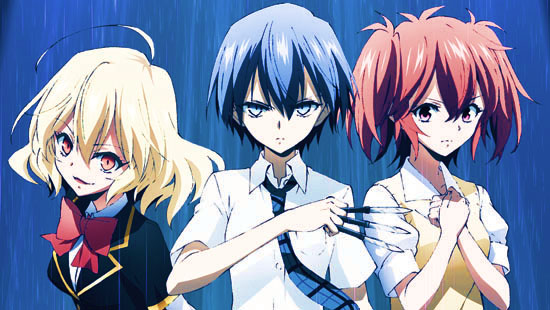 As exclusive as its name sounds, Myojo Private School is an institution defined in the surrounding skyline by a heavens-reaching testament of polished steel and flawless glass protected by power and money. Yet even this pristine educational facility for privileged, grade school- through college-aged children of the hoity-toity has its upper echelon: Class Black. Almost no-one on school grounds knows what it is or who’s in it. The only ones who are in the know are those in the administration who did the dialing and those who answered the call: 12 beautiful, bloodthirsty young women and one meek dear with an X etched into her back. They’re all lured to this elimination round under the pretense of having any wish (within the realm of possibility) granted if they emerge as victor. But when one of the invited chooses to switch sides, things get interesting … and nasty.

Based on an ongoing manga by Yun Kouga, Riddle Story of Devil (Akuma no Riddle) is a yuri-drenched piece of bubblegum action that introduces Haru Ichinose (the target), Tokaku Azuma (the defector), and 11 assassins—ranging from skilled professionals to deranged psychopaths—and follows the ensuing chaos throughout the course of the semester. But one super assassin protecting a lamb against the likes of 11 lovely lunatics would prove (at least in concept) predictable and therefore pretty boring. Luckily, Azuma has flaws inherent and otherwise that lend to the possibility of failure. 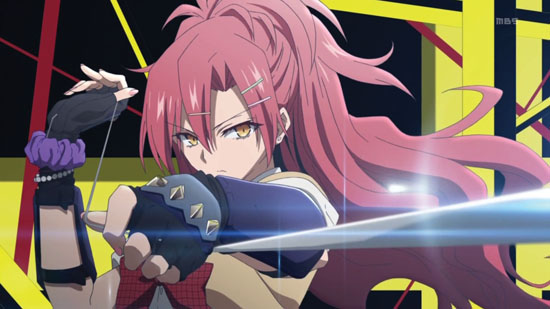 Well-flawed characters are, of course, instrumental to tension. The introductory episodes deliver enough doubt via faith in Haru’s helplessness and Azuma’s mental handicap to make their collaborative triumph questionable, and the following episodes provide even more fuel for the underdogs’ prospective pyres by adeptly exploiting Azuma’s non-omniscience. That is to say, the series treats Azuma like the human teenager she is. As Haru’s bodyguard, Azuma makes mistakes (emotional and tactical) that seriously call into question her own aptitude for being able to protect Haru’s life. To the contrary, the series, by presenting each of the antagonists as sharpened blades and only exposing their rusted cores later, enhances the immediate sense of danger posed by the omnipresent collective.

Only shallow introductions are allotted the assassins proper during the first two episodes; we know their faces, outfits, dispositions, and (for the most part) tools of the trade. There are also shark-toothed smiles, ricocheted leers, and scars aplenty to go around in case you didn’t quite catch on to the fact that everyone on roll call is made out to be monster. And to be honest, this is a lot of the show’s initial charm. Early on, the clumped and staggered arrival of the assassins, who are implied to be intensely competent via context and personality, fosters catty, thinly guised acts of passive aggression by which everyone sizes up everyone else. But the real fun starts at the business end of the assassination starting pistol. 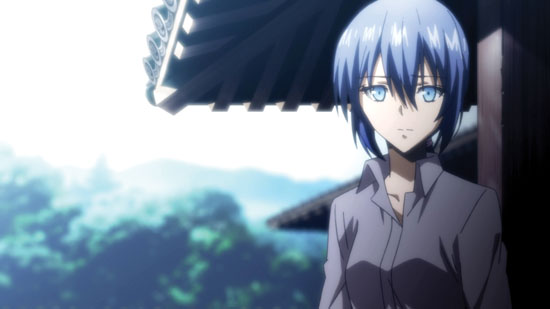 Each assassin, under the rules of the invitation, must deliver an advanced notice of their attempt on Haru’s life and carry out and succeed with said attempt within 48 hours to be considered the winner. There are no restrictions as to when or how many assassins can deliver these back-enveloped notices, but the series starts slowly to ease viewers into the mechanic. (Tweaking the formula and the fun that comes from doing so trickles in later.) Thus, each episode, at least early on, focuses on one assassin per installment—their back story, their plan, and their execution. While of diverse inclinations, some of the antagonists have questionable (at the least) motives and most remain largely flat; cheesy, trope-ish plots abound regarding all too shallowly established footholds. But this, too, is actually part of the anime’s charm: overdramatic to a tee.

By focusing on Azuma’s and Haru’s traits and relationship dynamic during the introductory episodes and following them as the focus of the various assassination attempts, the series sets up a battle of inequities—not between grenadier and pointy stick holder but between those with established and believable reason and those with excuses for violence against others. Azuma seems the most rounded and has her key developmental issue addressed throughout the progression of the show, and Haru get a small twist but is ultimately Haru and will only ever be Haru. Efforts are also made to define and flesh out the organization behind Class Black, but all that amounts to is static background and tonal color. 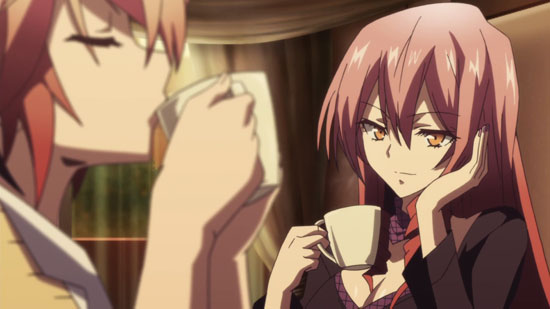 Despite the superficial plot and the shallow characters, or rather because of them, the series manages to have a lot of fun with the lightly plausible. Even that, however, comes crashing down in one of the later episodes when something pushes suspension of disbelief over the edge. (And that’s saying something for a series that has a waifish young woman swinging the equivalent of Mjolnir). Or rather, that would be problematic if the series wasn’t already so shallow and if the scene in question wasn’t so deliciously disturbing, violent, and outright funny for its outrageousness. And honestly, that episode hosts some of the best animated scenes in the entire show outside of the weight and force depicted in the effects of the hammer swings in the Episode 8-9 two-parter.

That said, Episodes 8 and 9 are great Halloween viewing and may be the best representations of what the series is capable of doing with atmosphere and tone when given a little more time and investment in character. Honestly, a lot could have been done to make the other episodes scarier or more vicious, and that the opportunity to do so was not available is lamentable. But the fact remains that 12 episodes simply don’t offer enough time to fully develop such a large cast, so hamming up the yuri and playing off love versus hate was probably the best course since patiently waiting for the manga to finish as to gauge a more developed course was evidently not an option. Still, each and every episode has its moments. 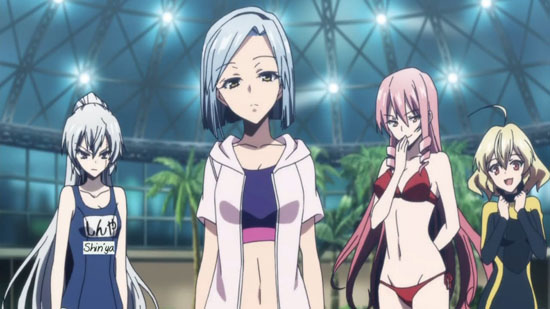 Such highlights are not always interactions. While certainly not the standard, there are some smart visuals that foreshadow certain aspects about one of the girls later on. Upon the first re-watch, they’re obvious in that “Why did I never notice that before” sense but blend rather artistically into everything during the first play-through. There are also at least two homages to Kunihiko Ikuhara, one via imagery and posture in Episode 5 (Sailor Moon), and one via art and background in Episode 4 (Utena). Kudos must also be given to diomedéa (Campione!, Problem Children …) for the animation production. Every scene is not laudable. In fact, most scenes get by on art direction via rich color and use of shadow. But there are successful attempts at fluid fight choreography and a few suspenseful scenes that leave the heart racing. (No, I’m not talking about the numerous shower/bath scenes.) These I’ll credit to director Keizou Kusakawa due to similarities with his work on Campione! and Problem Children… 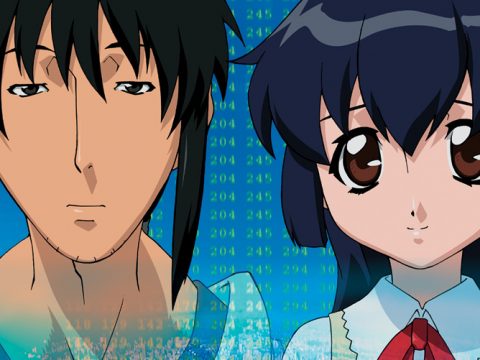