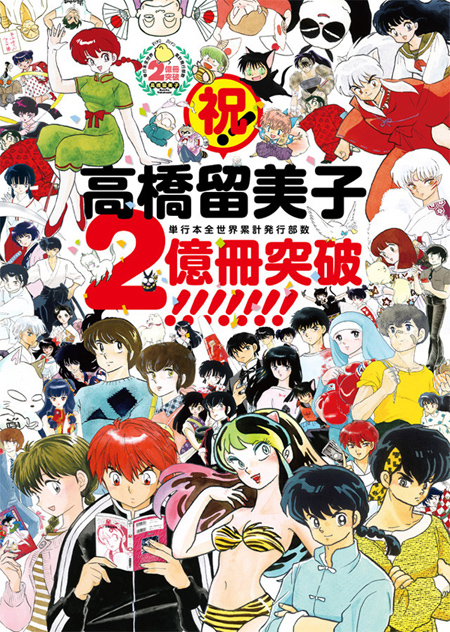 Rumiko Takahashi, the manga creator behind series like Urusei Yatsura, Maison Ikkoku, Ranma 1/2, Inuyasha and more was inducted into the Eisner Awards Hall of Fame at San Diego Comic-Con July 21.

The Will Eisner Comic Industry Awards are the premier awards for comics in the US.

Takahashi, born in 1957, got her start as a student of manga writer Kazuo Koike before publishing her first one-shot, Katte na Yatsura, in 1978. Takahashi would expand the idea behind that one-shot into Urusei Yatsura, which would run until 1987 and be adapted into a long-running anime series and many feature films.

Takahashi went on to create several more successful and award-winning manga franchises, including Maison Ikkoku, a story about life in a shared apartment, Ranma 1/2, a kung-fu gender-bending comedy, the feudal fairy tale Inuyasha, and Rin-ne, which Takahashi finished last year. That same year, it was announced there were over 200 million copies of Takahashi’s works in print around the world.

The Niigata native has also had a successful career in short story manga, with titles including Laughing Target, Mermaid Saga, One-Pound Gospel and more.

Ranma 1/2 and Urusei Yatsura were some of the first manga and anime to be released in the States, and served to spark many westerners’ initial interest in the media.

Other manga creators in the Hall of Fame include Osamu Tezuka, Katsuhiro Otomo and Takahashi’s early teacher, Kazuo Koike.

Congratulations to Takahashi for a well-deserved honor.