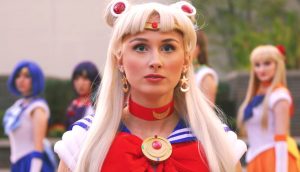 Sailor Moon is no stranger to the world of live-action, from 2003’s Pretty Guardian Sailor Moon tokusatsu show to an abundance of fan films that have been shared over the years. We’ve covered previous efforts in the past, and those hungry for more will want to check out the latest from director Fred Grant.

See Why A Silent Voice is Such a Highly Praised Anime Film in Theaters
DOUBLE DECKER! Anime Has Bonus Episodes on the Way Next Month