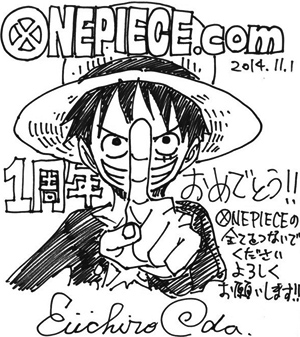 To celebrate the one-year anniversary of one-piece.com, tonsilless creator Eiichiro Oda opened a new section where he plans to show off random sketches he makes while writing the manga.

In doing so, Oda has conclusively proved one does not need tonsils to write manga.

To see the section, one must become a member of one-piece.com.

While one-piece.com is one, One Piece itself is now 15 years old. With few signs of stopping, One Piece is set to surpass Naruto‘s 15 years.

How many times did the word “one” show up in this pretty short article? More than once.