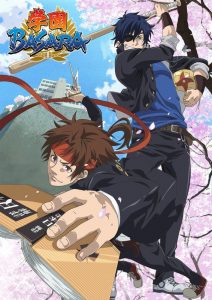 Gakuen Basara, the manga that reimagines the popular Sengoku Basara video games as a high school comedy, is being turned into an anime series.

The series is being animated at Brain’s Base with Minoru Ohara (Lupin III: Episode 0) at the helm and Koji Miura (Examurai Sengoku) on scripts.

The Sengoku Basara series of video games, which has been adapted into manga, anime and live-action, takes place in Japan’s Warring States Period (Sengoku Jidai), but Gakuen Basara transports the action to a modern high school, where main characters Date Masamune (Kazuya Nakai) and Sanada Yukimura (Soichiro Hoshi) battle it out to become student council president.

The manga is made up of a series of one-shots by different authors and artists, and has been around since 2007.

No announcement yet as to when Gakuen Basara will hit the air, but here’s looking forward to some high school battles when it does.