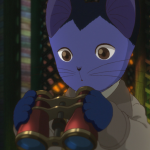 Sentai Filmworks’ latest acquisition is a recent adaptation of a classic, The Life of Budori Gusko. Originally released in 2012 and written and directed by Gisaburou Sugii, the movie adapts the 1932 fantasy novel by Kenji Miyazawa. It’s coming soon to select digital outlets, with a home video release to follow.

Based on the 1932 fantasy novel by Kenji Miyazawa, the film is a fairy tale that follows an anthromorphic cat named Budori living in the forests of Ihatov. After a series of misfortunes, including the spiriting away of his beloved sister, Budori sets off to build a better life – but a deadly winter is coming, and Budori finds himself the unlikely hero with a plan that can save everyone.