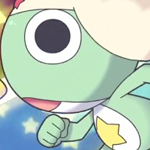 Fans of Mine Yoshizaki’s Sgt. Frog, rejoice. For the first time in nearly three years everyone’s favorite amphibian invader is getting ready to return to the world of animation in a new Sunrise Flash anime.

The new Keroro show is directed by Haruki Kasugamori, with the cast of the first anime returning to their respective roles. The series is set to kick off in Japan on March 22, and you can see a quick preview in the latest promo below.