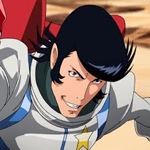 If you’ve been enjoying the madcap action of Shinichiro Watanabe and co.’s Space Dandy anime, you’ll love some of the news that came out of this weekend’s AnimeJapan 2014. Rumblings were already there, but a talk at the event confirmed a second season for this summer.

As for the Toonami run, it looks like we’ll be able to look forward to more fun alongside the Japanese TV broadcast. The block currently has plans to bring Space Dandy season 2 to Adult Swim in July. According to this tweet, the producer says season 2 will be “way crazier” than the first.