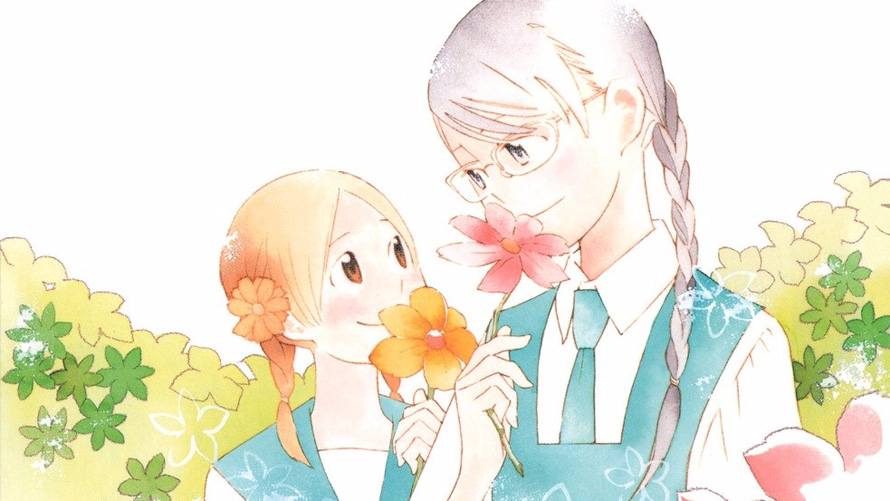 On going to a new, prestigious high school, Akira learns that her childhood best friend Fumi has moved back to town and is going to a nearby school. Now much taller than the cute, bubbly Akira, Fumi is no less prone to strong emotions, insecurities, and tears. The two soon fall back into old patterns with Akira looking out for her friend. However, there are things Akira cannot protect Fumi from—namely, her attraction to other women and the fallout from those relationships.

Sweet Blue Flowers is a yuri manga from Takako Shimura of Wandering Son fame. Shimura successfully strikes the delicate balance of portraying her young female cast as romantic and sexual but also naive and even innocent. The characters most certain about their sexualities seem comfortable with their identities and are willing to discuss them openly when it feels necessary. The overwhelming impression is that this is yuri predominantly for queer women. 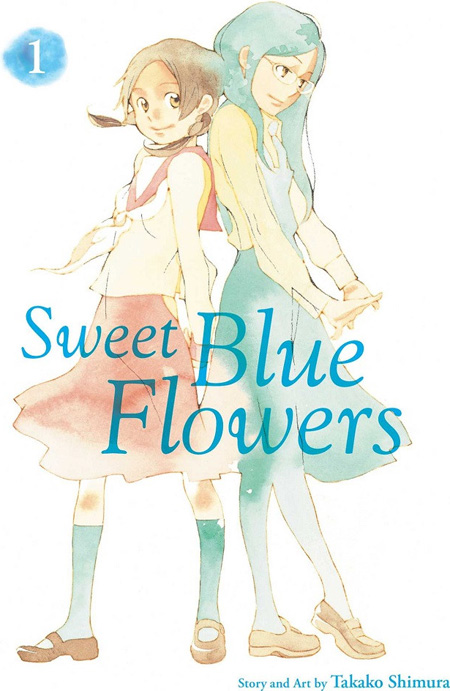 There are four major characters: Akira, Fumi, Fumi’s love interest Yasuko, and Akira’s classmate Kyoko, who also has feelings for Yasuko. The web of interactions between the four feels very typical of close teenage relationships. Apart from an uncomfortable and unnecessary sister complex from Akira’s older brother, none of the girls—or their feelings for each other—are fetishized. Most of the drama comes from fairly universal high school experiences: choosing which club to join, getting over old crushes, split loyalties between friends from different social circles, and so on. The same-sex romance is just one element—albeit an important one—of a sweet story about an interesting group of very different girls.

These characters are full of personality, and readers are likely to be naturally intrigued by their arcs. Yasuko and Kyoto are particularly nuanced side characters, showing dislikable sides to themselves without being relegated to villains. They are simply human, with all the selfishness, optimism, and confusion that brings. The art is as sweet and simple as its story, and presents each of the girls as charming and attractive in very different ways.

Shimura is known for her representations of struggles with personal identity, realistic relationships between young people, and her slow-paced storytelling. Sweet Blue Flowers is no exception on any of these points, painting a picture of everyday life with complicated young women going through important formative experiences. You’ll end the 400-page volume rooting for them all to have a happy ending. Recommended.

The Beauty of the Mysteries That Await in the Shadow of The Big O.
Anime Review: Blue Gale Xabungle