Look for more yaoi reviews in the February issue of Otaku USA, on sale now!

Akimoto, a middling judo wrestler, develops an ill-advised crush on judo champ Saitou after watching him perform at a meet. Their first meeting is immortalized on the memorable opening page of Dash!:

Akimoto: I came to this school because I admire Saitou!

But Dash! is too good-natured to descend into SM/dominance-themed erotica, or, for that matter, much erotica at all. Instead, the manga focuses on cheerful action and slapstick humor, as the balance of power between Akimoto and Saitou shifts back and forth and Akimoto’s feelings evolve from hero worship to romantic love. The volume also includes a backup story, “Cheeky,” in which two cousins and childhood friends are reunited as teenagers; one is now a clean-cut athlete, the other a gigolo who keeps trying to jump his old friend. Both stories feature very little sex; a peck on the lips is a big deal, and any racier behavior is drawn briefly and discreetly. Natsume’s big-mouthed, spiky-haired, constantly grinning or grimacing characters look more like the heroes of a shonen fighting manga than yaoi lovers. It’s sweet, sometimes funny, but ultimately meandering and unsatisfying.

Short story collection and inspiration for the better-known anime OAV. In the title story, two male manga artists-wide-eyed young Seiji and older, sluttier Sono-fall in lust after admiring one another’s comics. Other stories feature a tough teenager who keeps letting his crush beat him up (“I can’t hit him. Not that pretty face”), two childhood friends who experimented together as boys, a photographer who gets involved with the boss’s son, and a pair of old lovers who are reunited as adults after one of them has married and had twins. The nuttiest story is easily “Trophies Belong in the Bedroom,” wherein a pet-sitter is hired to take care of a man’s pet “rabbit,” only to find a bunny-boy tied up in the closet. The scenarios are generally inventive and witty, with the translation providing some amusing dialogue: “Yes, Seiji-kun. But how about some pants?” Ashika’s art is decent, consisting almost entirely of cute guys paired off by hair color.

Invisible Love is a collection of stories about the love lives of a handful of hot men. Although the six stories involve different couples, you would be hard pressed to tell the difference though as they all look like the same two guys. The tales all follow a pretty much identical plot line as well. The seme falls willy-nilly in love with a cute (usually blond) uke. A few convenient plot twists later the two confess their love and the seme makes love to the uke who pretty much just lays there like a starfish stuck on a rock at low tide and lets it all happen.

The strongest story is “The Warmth of Your Hand,” about a young man who was rescued from a blizzard as a child. As an adult he finds himself in a relationship with a secretive man (blond of course) who seems overly curious about what happened that wintery day. However, aside from this story, there isn’t much in Invisible Love worth picking up.

The elite Kourenji family needs to select the next Head of the Household, but love isn’t always willing to obey the family’s will. Estranged grandson Kaoru is brought in to assume the position, but just as the issue seems resolved, Kaoru’s cousin Ryuugo comes back as well! As they await a decision and their grandmother struggles with her failing health, Kaoru’s motivations come into question. What are his intentions for the Kourenji household? Is he really chasing the family inheritance, or is he more interested in Ryuugo?

Another work from prolific manga artist Makoto Tateno, this one takes the popular angle of love within the confines of a strict, traditional family. It’s a well-used concept for good reason, as it breeds plenty of conflict, and passion is heightened when it’s forbidden. For the most part this one’s pleasantly diverting-there’s a good bit of drama, the sex scenes are hot, and Tateno works in a side helping of an older couple (my favorite part of this book). However, one subplot didn’t feel fully explained, and the single-volume length means the intrigue is left fairly simple and resolved in a hurry, keeping it from being quite as dramatically strong as it tries for.

Ritsuro is an ordinary, preppy-looking high school student, but his best friend, Ken, has dropped out of school and fallen into a degenerate gigolo lifestyle. When Ken sleeps with Ritsuko’s girlfriend Moeko, Ritsuko digs deeper behind his initial reaction of anger, and discovers that his feelings for his friend are stronger than he imagined. They soon turn from friends to lovers, but Ken is still haunted by his past of childhood abandonment and stalked by sleazy ex-lovers who still want him.

Originally published in 1992, I Shall Never Return ties with Kizuna for the title of oldest translated Boy’s Love manga. Like Kizuna, the art and character designs are dated-lanky, long-jawed guys, abstract shojo page layouts, and lots of flowers-but it is the story that really stands out compared to modern BL, with nods to realism (the seme-uke division is not ironclad) and a focus on repressed BL. (“May I ask something? Why do you like guys? Is it ï¿½ï¿½ some mistake of nature?”) For those who don’t mind the old-school artwork, the story pays off with a consensual relationship with plenty of melodramatic angst. (“Go and lick each other’s wounds! Your dirty wounds!”) A fun title.

A sweet, awkward story about two salarymen men who pass each other at the same bus stop every morning makes up half of this book. Tsuzuki always fantasizes about the handsome stranger at the bus stop, but can he actually bring his dreams to life? The rest of the book consists of three unrelated short stories: a shy salaryman discovers he works with an old school crush; a flower shop owner tries to romance the teacher of a class interning in his store; and a drunken kiss at an office party kickstarts a tense relationship between coworkers.

There’s not much complexity at work here, but rather a set of short, sweet romances. Natsumizu’s art is simple but pleasing, and she likes handsome salarymen in nice suits, which works out fine for me. It’s all fluff, but it’s amusing, enjoyable fluff. Tsuzuki is adorably silly in the main “bus stop” sequence of stories as he tries to feel guilty about his fantasies but mostly just indulges-though it’s too bad some of them weren’t longer, especially when one was about to bring on the handcuffs. I tend to prefer a bit more hardcore action, but what’s there is well done.

From Up Above
Publisher: DMP
Story and Art: Sakuya Kurekoshi
Rating: 16+

One day, Yuuto is heading home from kendo practice when he gets struck by lightning! Miraculously, he’s uninjured, but that’s not the only odd thing-a strange, beautiful young man named Kazuchi suddenly appears, and Yuuto’s family thinks Kazuchi is his cousin. Soon Yuuto discovers that Kazuchi is really a raijuu (sort of a cat-like lightning spirit) looking for the reincarnation of a priestess who commands him. As you can probably guess, Yuuto’s the former priestess. Unfortunately for Yuuto, but lucky for the fangirls, Kazuchi needs to feed on human energy, and making out with Yuuto is his method of choice.

The right pieces are there in this one: cute guys, mystical creatures, love across reincarnations, and humor. Unfortunately it never seems to come together into a fully enjoyable whole. The characters in volume one feel somewhat flat, more like templates in a “how to write supernatural Boy’s Love” primer than fleshed out people. Jokes and moments of super-deformed silliness feel weakly timed and awkward. There’s nothing in the book that’s not completely predictable, which isn’t always bad, but when done without lots of charm and absolutely no smut to distract, it tends to grate. More volumes are upcoming, but this beginning isn’t promising. 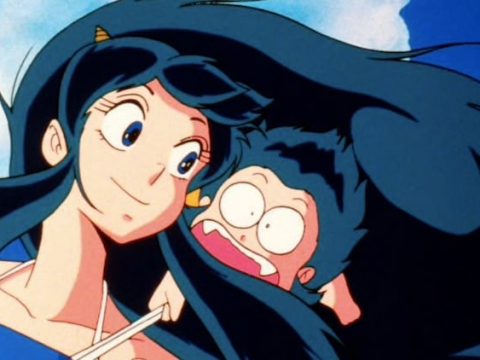