Get ready to dive back into the world of Free!.

The Kyoto Animation franchise about the boys of the Iwatobi Swim Club is set to get not one but three theatrical films this year, it was announced at an event yesterday.

The first two films, entitled Free! -Timeless Memory-, are compilations which recap the story of the series up to now. The first film, Kizuna (Bonds) focuses on the Iwatobi Swim Club, while the second, Yakusoku (Promise) focuses on Rin and Sosuke. Both films will feature new footage.

Kizuna will be released April 22, and Yakusoku July 1.

But the really exciting part of this announcement for Free! fans is the third film, Free! -Take Your Marks-, which is a 100% new film. It’s reported to take place in spring, right before Haruka’s graduation from high school.

Take Your Marks will open this fall.

Free!, which originally debuted way back in 2013, has had two seasons of TV anime plus a theatrical film, High Speed! -Free! Starting Days-.

Free! fans: just how excited are you? 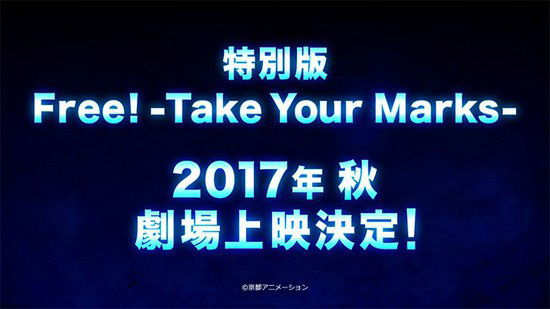