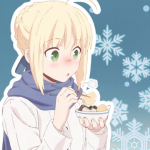 Fate fans looking for a twist on their favorite franchise should take note of streaming anime Today’s Menu for Emiya Family. Based on the parody manga written and illustrated by TAa, the series has Shirou Emiya preparing dishes for other Fate series characters, including Saber, Rin, Sakura, Rider, and Lancer.

Ufotable premiered the first episode during their New Year’s Eve special, and a re-airing is planned for later this month. The series will continue with episode 2 streaming on AbemaTV in Japan this February, and you can see a quick preview below.