A Tropical Fish Yearns for Snow in this Charming Manga [Review] 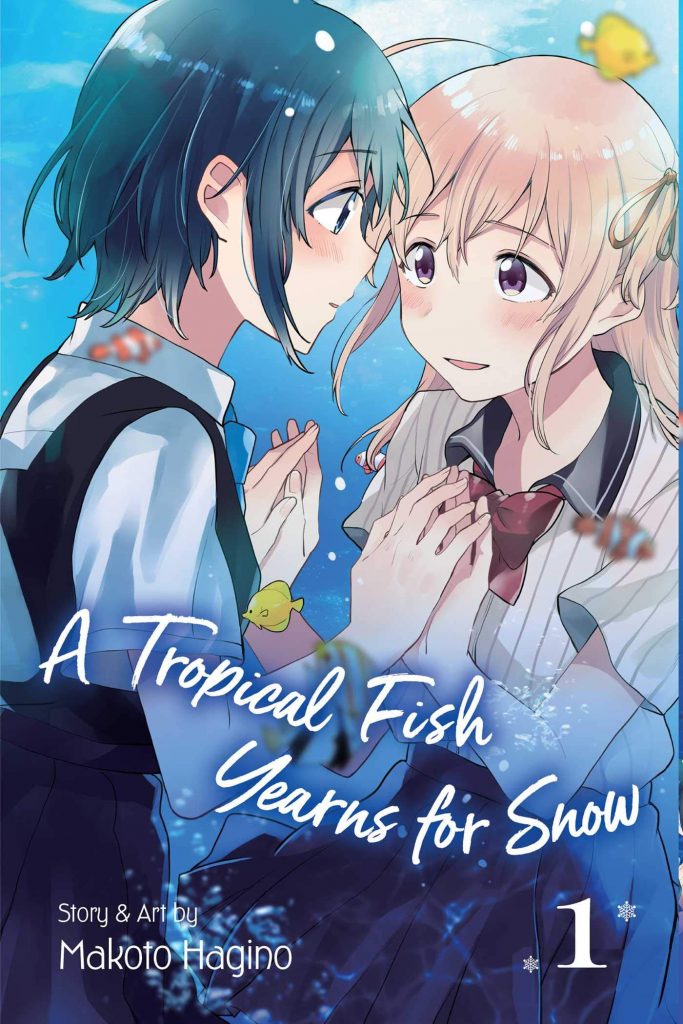 High schooler Konatsu Amano is lonely. Her father has left the country for a job, and she’s left her home in Tokyo to live with an aunt in the seaside village of Nanahama. She texts her dad but he remains faceless, and the aunt is pretty nonexistent as well.

Konatsu wants to make new friends at school, and she stumbles into a room full of aquariums. There are clown fish and a shark, plus a salamander that likes to hide in its exhibit. All this is part of the school’s aquarium club. And there’s Koyuki, the girl who runs the club (and is the only member).

Both girls are shy, and while Koyuki has more than one boy interested in her, she’s not interested in them. The shojo-ai vibes are all throughout A Tropical Fish Yearns for Snow, though nothing actually happens between the two of them. It’s more about blushing and innuendos. At one point both girls take turns putting their mouths on an aquarium hose to get the water out, then there’s a blushing comment about how it was an “indirect kiss.” That sort of stuff. There’s not a whole lot of shojo-ai being licensed in America (your best bets to find them are probably at Digital Manga Publishing and Seven Seas), so this is a little bit different from the standard fare.

There’s another girl, Kaede, who tries to get Konatsu to join the Home Ec Club (all students have to join a club) which causes stress for Konatsu, because she’s more drawn to Koyuki and the aquarium club. Konatsu even wants to name the shy salamander Koyuki, which can be a little confusing at moments when you think she’s talking about the girl and then you realize it’s the salamander. The girls are quick to get worked up, but the manga itself is very laid-back even as it gives a melancholy feel. Like the girls, the manga slowly reveals itself emotionally. It’s all about quiet yearning. The sea life and other animals shown are kind of realistic looking, but also have humanlike smiles and expressions sometimes, making it more kawaii than what you’d find in a marine biology book.

It turns out the aquarium club is based on a real club that is in none other than Nagahama, so that’s a neat twist. Mangaka Makoto Hagino says in the afterword, “I’ll be so happy if this manga helps them [the real club] even a little.” Besides that, maybe it can encourage more aquarium clubs in schools!

_______
Danica Davidson, along with Japanese mangaka Rena Saiya, is the author of Manga Art for Intermediates. In addition to showing how to draw manga character types in detail, the book describes how professional Japanese manga creators work, including common techniques and what drawing utensils they use.