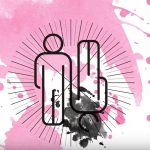 Heres the latest teaser, which reads (via Anime News Network) “Am I a lie, is the world a lie, are we a lie?” The narrator responds, “We are connected. But that’s unpleasant. But that’s wanted. Who is the one with a strong desire?” The text that closes it out says, “Don’t let it go, desire is your life.”