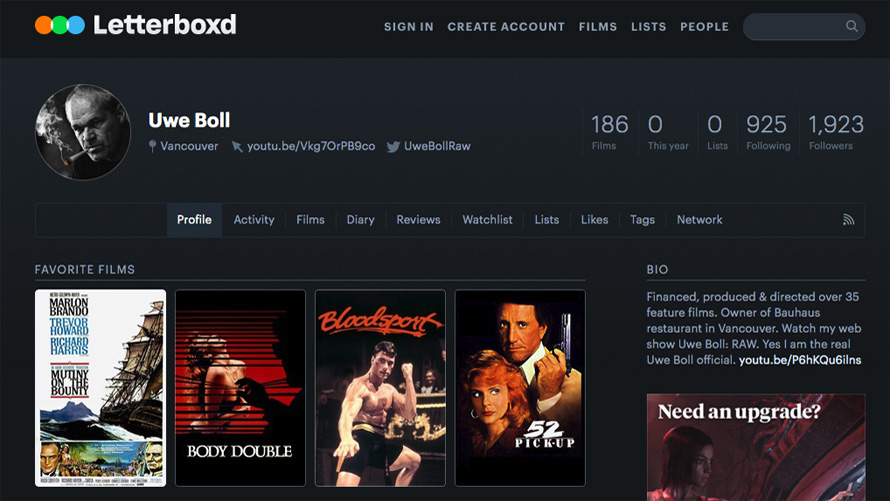 The past few years have seen so many live-action adaptions of videogames and anime that it’s hard to remember that we experienced a similar boom in adaptations way back in the early 2000s. Before the live-action Sonic The Hedgehog gave us endless meme material in a single ill-fated trailer, the success of Hollywood’s Tomb Raider and Resident Evil flicks spawned dozens of bandwagoning, grimdark videogame adaptations… and half of them were made by the same guy.

In less than a decade, German director Uwe Boll pumped out House Of The Dead, two Alone In The Dark films, three BloodRayne movies, and numerous original action flicks of equal quality. He became a living icon of terrible movies, and adding fuel to the fire, Boll responded to critics with both verbal attacks and physical threats, which resulted in several actual boxing matches. Eventually game developers stopped giving him their IP, but he never stopped raging over the negative reception of his films.

Perhaps emboldened by the release in late 2018 of documentary Fuck You All: The Uwe Boll Story, Uwe Boll has spent this spring building a public profile on review site Letterboxd, writing nearly 200 film reviews in just a couple months’ time. It’s hard to definitively prove it’s the real Uwe Boll behind the account, but his bitter attitude towards popular opinion (and willingness to jump into personal arguments with commenters) looks authentic.

Among Uwe Boll’s acerbic reviews are a few titles of interest to Otaku USA readers. Boll assigned half a star out of five, along with some childishly offensive (and in one case, outright racist) language to the following films:

“fucking garage. only children will like it, adult man child with the gummy bears in the bears and all of this stuff, so stupid”

“Her eyes ruin the movie. The real actress also much chunkier. CGI overload turns it into a lame cartoon for children and mongoloids.”

Strangely enough, while Boll trashed the relatively well-received Pokémon and Alita films, he gave a fairly-high three star rating to the unpopular live-action Super Mario Bros. based on the following reasons:

His reviews of films based on western IP are similarly articulate; Captain Marvel receives half a star because “she need penises in her vagina”. Whether the author is the real Uwe Boll or a random 4chan troll, the end result would appear to be the same. If you enjoy the “so bad it’s good” quality of his films, these reviews will not disappoint…otherwise you may want to save your brain cells.

Source: I Hate Everything