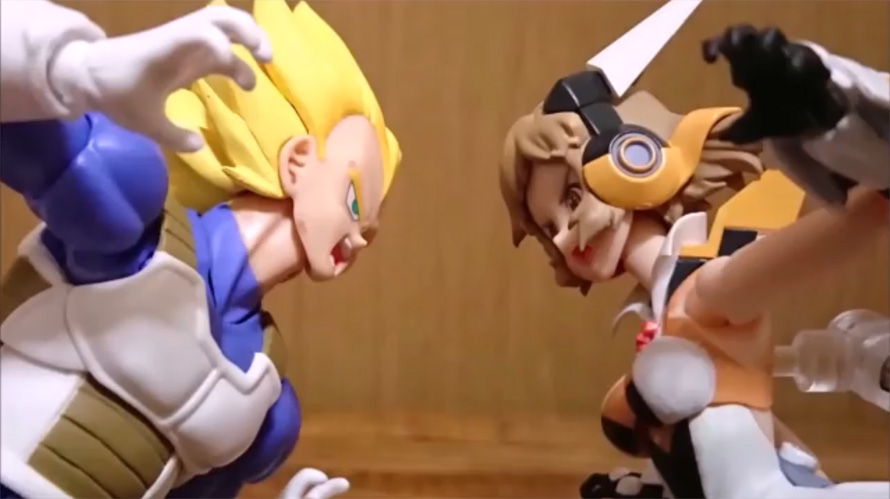 It’s always nice to see fan-made animations. Whether hand-drawn (like these anime-style tributes to Star Wars and Game of Thrones) or stop-motion (like these Attack On Titan shorts), the effort is always impressive and the results are very different experience from non-moving forms of fan art. Recently, Japanese fan Hamuan12 has been turning heads with a stop-motion action figure showdown between Dragon Ball‘s Vegeta (made by S.H. Figuarts) and Hibiki Tachibana from Senki Zesshou Symphogear (made by Figma).

What’s most striking about Hamuan12’s work is the length; this thing clocks in at 20-minutes long, much like a real anime episode. The twitter post above only shows 40 second preview, so to see the whole thing you’ve gotta click through to Japanese streaming site Nico Video. Not only is there a lot of action, but Hamuan12 employs all of shonen anime’s authentic techniques of lengthening the experience; long bouts of threatening dialog, extended clouds of dust, and the interruptions of by-standers like Vegeta’s loyal son Trunks.

Humuan12 has been experimenting with stop-motion for at least four years (at least that’s how far back his Youtube channel goes), but this is easily his best effort yet. One might assume that stop-motion animation is easy when your subjects are store-bought figures which have been professionally modeled with high levels of articulation, but a look back at his older work shows just how many things can go wrong. Compared to his latest video, the motion in his older ones looks choppy in spite of how many frames have been shot, and the lightning is inconsistent between frames, which creates a distracting flickering effect. He has clearly polished his technique a lot since then.