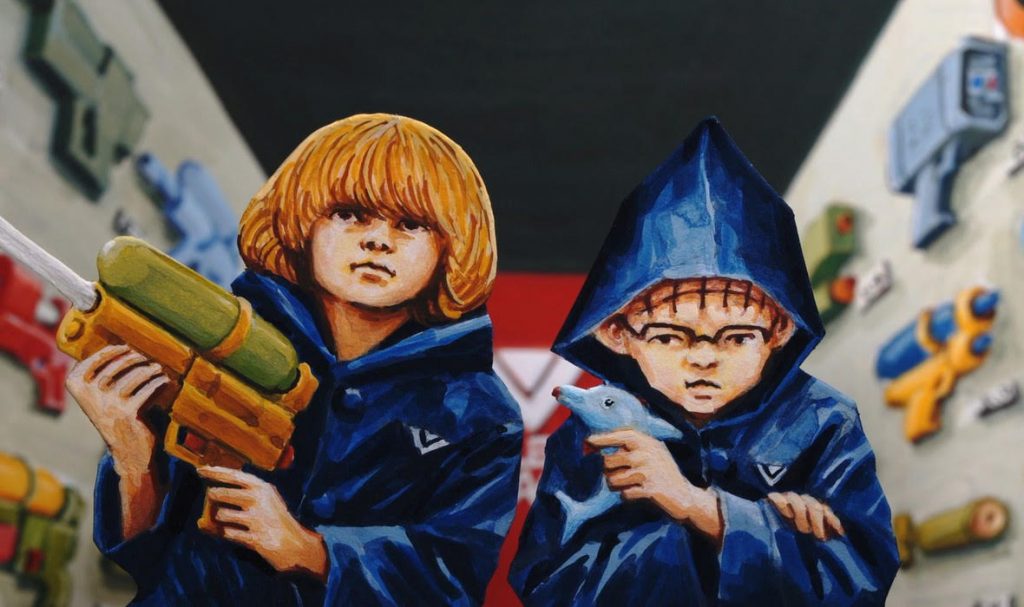 There’s a good chance you’ve never seen a “gekimation” film before. Independent director Ujicha has made his name on the stuff, but his latest horror film, Violence Voyager, is the first time anyone has created an entire gekimation feature. The term refers to an unusual filmmaking style combining the traditions of Japanese cutout animation, puppetry, and kamishibai paper plays, and is largely associated with the 1976 TV adaptation of The Cat Eyed Boy by horror manga master Kazuo Umezu (The Drifting Classroom).

However, that series isn’t, strictly speaking, “animated” at all. It was created by filming paper cutouts moving in real-time through small sets, complete with liquid and smoke effects. This is in contrast to animation, which combines individual still frames into a moving image. 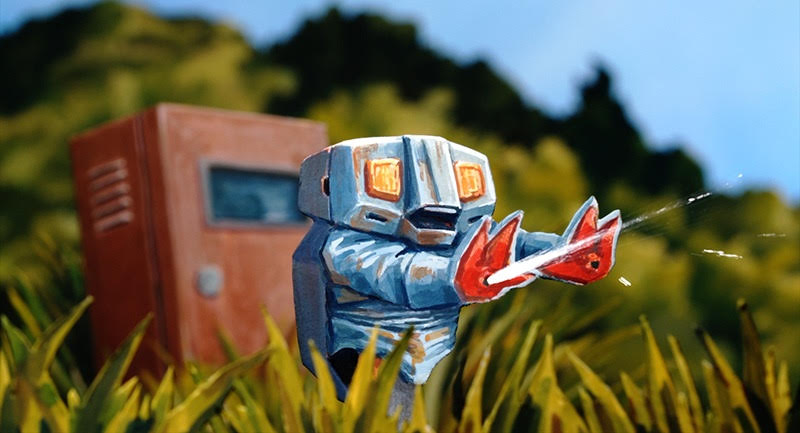 The term “gekimation” itself appears to acknowledge this directly. Geki can mean “dramatic,” as it does in the case of gekiga, the comic book movement that introduced an alternative to the more comedic manga, but it can also refer to a stage play. Gekimation is a sort of “drawn play,” a hybrid of the moving drawings of animation and the persistent physical space of theatre. Its character cutouts are closer to the puppets of Thunderbolt Fantasy than true animated characters.

All that is to say that Violence Voyager is unlike just about any anime you’ve ever watched — not just in its iconoclastic art, but in its subject matter as well. It begins with two kids, American Bobby and his Japanese friend Akun, taking a trek up a nearby mountain at sunset (what could possibly go wrong?). There are no ghosts or hockey-masked slashers on the mountain; just an old, nearly abandoned amusement park called “Violence Voyager.” But when a visit to the park goes off the rails, the pair find themselves in a fight for their lives against its owner and his army of genetically engineered monstrosities. 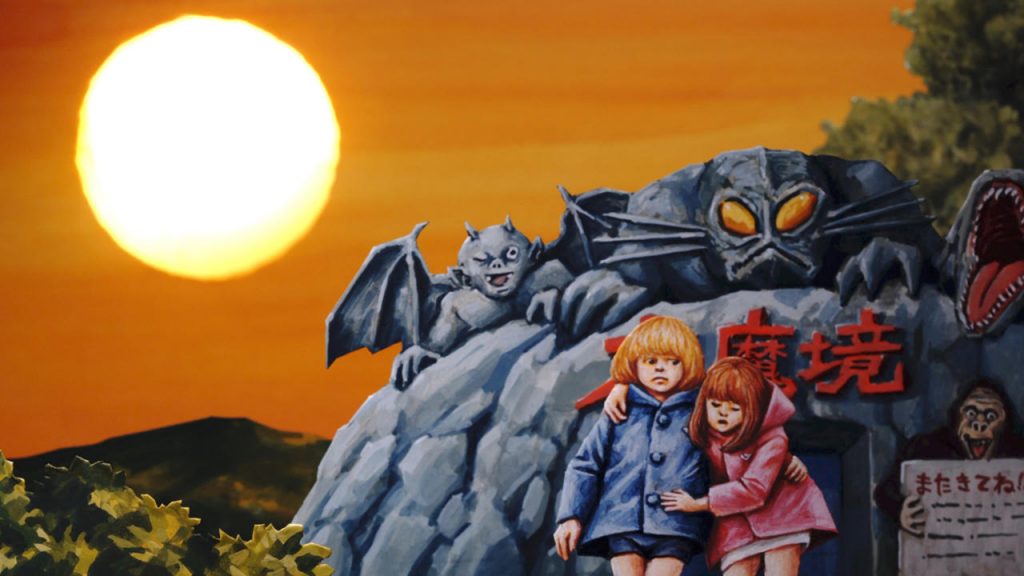 The film’s horror influences appear to come largely from manga. Characters’ bodies are subjected to grotesque deformations reminiscent of the work of Junji Ito, and his focus on child protagonists seems like a clear nod to Kazuo Umezu (another connection back to The Cat Eyed Boy). In fact, a running theme in the film is the inability of adult authority figures to protect young people from harm, and the unexpected bravery of children placed in horrific situations. Outside of Japanese influences, Violence Voyager’s gleeful body horror also calls to mind the famous French Grand Guignol theater, known for its naturalistic depictions of gruesome horror scenarios (manga fans might recall it as an influence on Usamaru Furuya’s Lychee Light Club, based on a play by the Tokyo Grand Guignol theater).

There’s also something commendable about making a movie as downright weird as this one. In between the gore, we get a giant robot, a kid joining forces with a pet chimpanzee and a wild bat, and a subplot revolving around wearing the wrong underwear. Unfortunately, Ujicha appears to lose the plot as he throws more and more weird ideas into his cauldron of depravity, and it’s not always easy to tell whether you’re supposed to be laughing, crying, or throwing up. The English dub, delivered in halting, shouty tones by professional actors who clearly know better, doesn’t help stave off the persistent sense of camp. 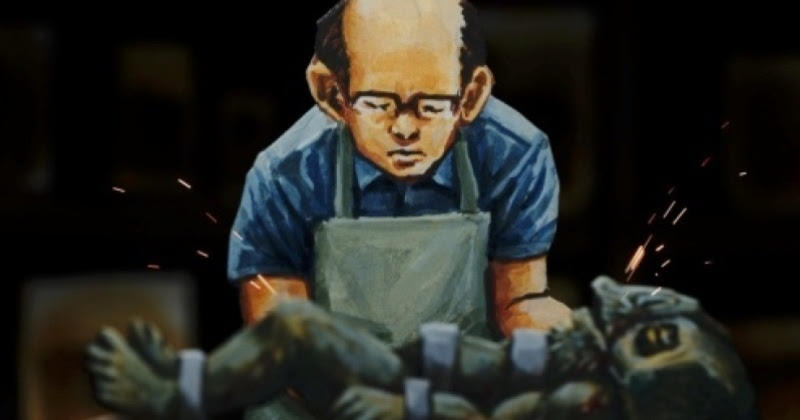 Nevertheless, Ujicha’s claim to fame is being the gekimation guy, and if nothing else, Violence Voyager represents a strong revival of the art style. All of the cutouts are beautifully hand-painted. Their liminal appearance, halfway between the familiarity of anime and the tangibility of puppets, underscores the pervasive sense that something is very wrong in the world of the film. Most impressively, Violence Voyager is full of ingenious practical effects. At various points, water and other fluids get launched from holes in the cutouts, then land and congeal on other ones. This is incredibly clever, groundbreaking stuff, with far more texture and personality to it than the comparatively plain cutouts of Yamishibai (another project inspired by The Cat Eyed Boy). I would pay good money for an extended behind-the-scenes look into the production!

Violence Voyager doesn’t always work as a straight-up horror movie, but if you’re looking for something to jolt you out of your everyday anime habits, this will certainly do the trick. It’s an ambitious, completely bonkers passion project from an independent auteur, and like many films in this category, the camp is part of the charm.

Violence Voyager will be available Oct. 21 on Amazon, DirecTV, FlixFling, Vimeo on Demand, Vudu, FANDANGO and AT&T via DarkCoast.

Evan Minto is the Editor-in-Chief of Ani-Gamers and writes about anime and manga for Otaku USA, Crunchyroll, Anime News Network, and IGN.