Nintendo’s weekly downloads have once again been pretty sparse of late as far as interesting titles go, but they’re jumping back into the spotlight this week with another very special “3D Classics” release of a beloved Nintendo game.

This time it’s Kirby’s Adventure, originally released in 1993, which marks that power-suckin’ pink puffball’s first official adventure for the Nintendo Entertainment System. Now his quest to restore the pieces of the Star Rod and stop King Dedede can be experienced in 3D on Nintendo 3DS. The best part: the downloadable title only costs $5.99. Not bad for one of Kirby’s early classics. 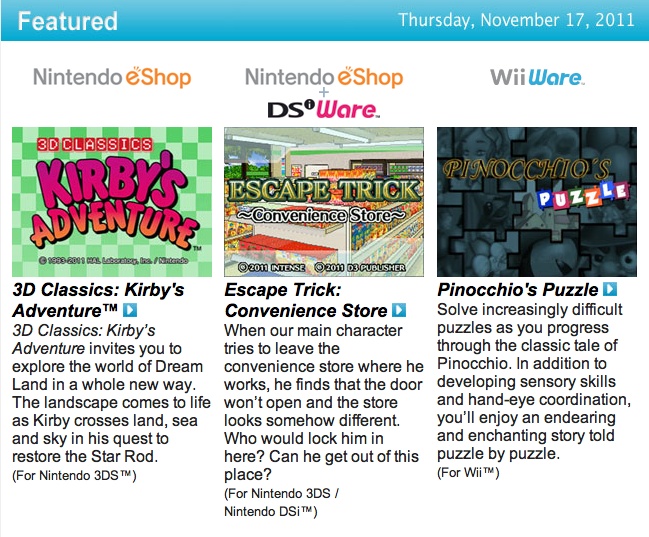 Other titles hitting this week include Escape Trick ($4.99, 3DS eShop), which finds the player trapped in a convenience store. Can he solve the mystery and escape? There’s also Pinocchio’s Puzzle (500 Wii Points, WiiWare), Play and Learn Chinese ($7.99, eShop), and a Nintendo Video celebrating The Legend of Zelda‘s 25th anniversary with a symphonic version of the “Fountain Theme.”

Anyone planning on picking up any of this week’s downloadable releases?