It’s Thursday, and you know what that (usually) means! It’s time for another edition of Virtual Boy, which catalogs the highlights of Nintendo’s weekly downloadable titles. The fact that this article is even appearing MUST be a sign of something noteworthy, and that is indeed the case this week, as one of the additions to the Nintendo 3DS eShop is none other than the blue bomber himself!

Yes, Mega Man is back, and this nostalgic trip takes us to his first appearance on Nintendo’s Game Boy, Mega Man: Dr. Wily’s Revenge. This treat from 1991 actually combines elements of both Mega Man and Mega Man 2, making it more than a simple port of the NES original. The best part? It’ll only run you $3.99. 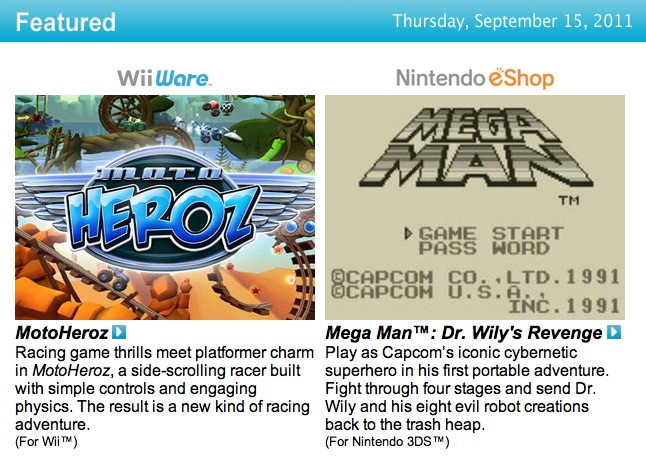 Not much can top that as far as other titles are concerned, but here’s the lineup. There’s racing-meets-platforming action with MotoHeroz (WiiWare), strategic defense in the form of Defense of the Middle Kingdom (eShop/DSiWare) and… Bridge (eShop/DSiWare).