Whenever Our Eyes Meet: A Women’s Love Anthology [Review] 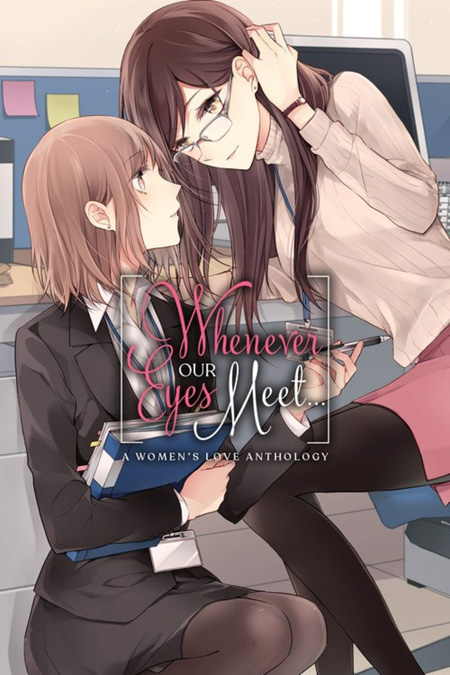 The vast majority of translated yuri (lesbian) manga is set in high school or college, so it’s exciting to see an anthology about romance between adult working women. In short 10-to-20-page stories, freelance illustrators, tech workers, factory workers, and editors-in-chief flirt, sleep together, and fall in love. For those old enough to remember manga of the 80s and 90s, when the only depictions of Japanese working women were “office ladies,” i.e. secretaries and office managers, that in itself is refreshing.

By the nature of the anthology format, many of the manga are more vignettes than full stories. Many old tropes of yuri and BL are dodged here; although not all the characters are out of the closet, there are no tales of repressed or self-hating homosexuality and not much romantic power imbalance (though “Oblivious You” manages to have fun with student-teacher romance, as a high school teacher sees one of her former students return to school as a teacher herself). The dirtiest (and cheesiest, and unfortunately worst-drawn) story is “I Want to Make My Work Senpai Moan!”, where two lovers and coworkers make a deal that whoever makes the most in sales gets to be on top that month.

Mostly, though, the stories stay out of the bedroom, and only a few ambiguous topless shots push this into 16+ territory. In “The Women at a Certain Company,” a project manager has a one-night stand only to find out that the other woman is a new hire at her firm, where she flirts with her closeted manager (“Oh no … being outed as gay is even worse for your reputation than being outed as a geek!”). “Everyone’s Missing Out” puts a lesbian spin on Ristorante Paradiso-style age play. In “In My Studio Apartment Palace,” the saddest tale, the librarian protagonist runs away to a new job and a new neighborhood to put distance between herself and the woman she loves. (“I’ve decided to live the rest of my life at work surrounded by books.”) The lesser tales feel like job/relationship mad libs: taxi driver and sales associate! Optometrist and executive! Artist and café owner! A light anthology overall, it’s hit and miss, with satisfying short dramas and charming moments alternating with less successful, trivial tales.