You Can Marry A Battleship Girl in Kancolle 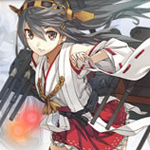 Like many other free-to-play videogames, Kancolle (Fleet Collection) walks a line between the user-friendliness needed to coax in a large player base… and the inevitability of charging for some important in-game function in order to make sure the game is both popular and profitable.

There are straightforward pay-to-win scams, games that actually charge for everything you’ll need in order to play the game for longer than a week, and of course the slot machine option. But nobody thought of what Kancolle did. Kancolle has successfully monetized marrying one’s anime wife.

Upon leveling your ship to level 99, you can use the “Documents Set and Ring” (700 yen, about $7 right now) to pop the question.

Here you can see the whole 7-buck procedure go down with the popular Haruna. Once married, of course, the level cap is increased by 50 levels(!!), so this mechanic is something players will really want for its game advantage as well, rather than the strictly cosmetic purchases favored by “gamer”-oriented free-to-plays. We are not sure what Kancolle‘s stance on boat girl polygamy is.

Clearly, this revolutionary mechanic is going to send shockwaves through free-to-play at large. Is it long before players are marrying Hera for a stat boost in Puzzle and Dragons? Will the next Angry Birds be “Finding the Right Bird And Settling Down Angry Birds”? How long before EA ruins the whole thing by introducing $50 marriage certificates to the next Bioware RPG? None can say.

FUNimation Adds Soul Eater Not! Anime
Hello Kitty Will Not Be Appearing In Super Robot Wars This Week