your name. is an international phenomenon, joining the ranks of anime films from Spirited Away to Pokemon: The First Movie that managed to break into the American mainstream. The emotional journey of a boy and girl who find themselves switching bodies manages to avoid the clichés of body-swap stories and pull off what is fundamentally Freaky Friday in a way that seems fresh. When a film is this popular, there’s going to be companion material, and in Japan that means manga. 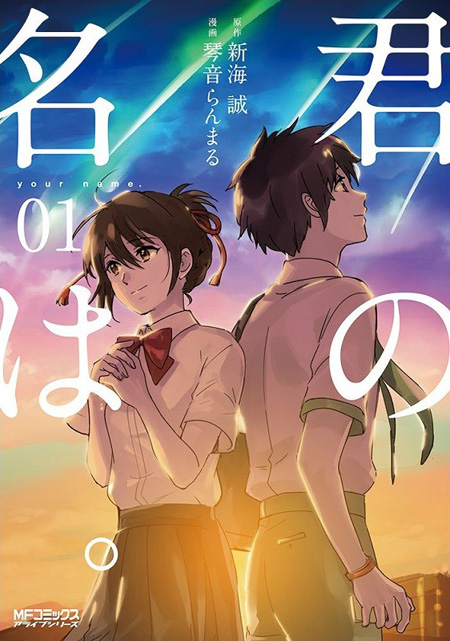 Makoto Shinkai simultaneously worked on the your name. light novel, animated film, and manga, all released within a short period in Japan. Usually manga adaptations of anime, and vice versa, will harbor some differences. That’s not the case here. The first volume of the manga faithfully covers the first 30 to 45 minutes of the film. In fact, it suffers from being such a close tie-in. If you’ve already seen the anime, there’s nothing new to discover in the manga. The artwork is an excellent copy of the film’s style and looks great. But without anything new to add, it feels a bit sterile.

If the movie didn’t exist, would your name. be seen as a great manga? It’s impossible to say for sure, but I’m inclined to say no. The story works best as a film, and even though the art in the manga is spot on, it lacks the beauty of color and motion.

The your name. manga reminded me of those little film adaptation novellas they used to publish for movies aimed at kids. You could get a faithful retelling of the plot, but they couldn’t match the sense of wonder that you got from seeing the real thing. If you’re a big fan of
your name. and just want a book that faithfully follows the source material, this volume is a good beginning. Otherwise, go see the movie.

This story appears in the April 2018 issue of Otaku USA Magazine. Click here to get a print copy.