A subtitle like “New Generation” sets off internal warning bells. When an established series builds its cast, places each character in a specific, designated role within the story, and the viewers come to appreciate this structuring, it can be mighty difficult to break down and rebuild this foundation to favorable results. Will the viewers be blessed with a Star Trek: The Next Generation or cursed with a Saved by the Bell: The New Class? Outdated examples aside, studios TMS Entertainment and 8PAN have a challenge on their hands with Yowamushi Pedal: New Generation, just as unfamiliar faces join old stalwarts to tackle oncoming obstacles along the road to high school cycling glory.

But first, leave no loose end untied. New Generation picks up roughly where the second season of Yowamushi Pedal, Grande Road, left off. That is to say, New Generation begins shortly after the completion of the Boys’ Inter-High Road Race, a yearly, three-day national competition that gathers bicycle racing clubs from across Japan. More precisely, it was the Inter-High that took place during our otaku protagonist’s first year at Sohoku High. Sakamichi Onoda and friends are on summer vacation, and those who happened to catch Yowamushi Pedal: The Movie may find themselves experiencing a touch of déjà vu. Worry not, however, as New Generation spends little time retreading old asphalt. Compared to Grande Road, which spent nearly its entire span on a single day, events in New Generation seem to zoom by in the blink of an eye.

Summer gives way to autumn and its first competitive race of the season, the Minegayama Hill Climb Race, and from there, we quickly transition to winter and then spring, to the start of a brand new school year in April and beyond, before even the 10th episode of New Generation comes to pass. The third-year students we’ve grown to love make their expected, yet no less saddening, departures, some earlier than others, but this presents some tantalizing character development opportunities.

In sports anime, it comes as no surprise that the focus is typically laid upon the experienced third-years and the unknown potential of the first-years. Caught in the middle, characters enrolled in their second year tend to be neglected, but as they shift into their roles as third-years, New Generation lavishes them with time in the spotlight, especially those appointed as captains and vice-captains. We also see the former first-years mature, striving to guide and encourage the incoming class, and even previously one-dimensional background characters evolve and seize new positions in the dynamics of the cast. Preparations for the Inter-High begin once more, as the champions aim to defend their crown and the others work to claim it as their own. To this end, some refine their skills while others expand upon them, converting from specialized racers to all-rounders.

Suffice to say, New Generation is all about growth. Yowamushi Pedal has come full circle, and while the returning cast members reminisce about when they began their respective first and second years of high school, they reap the rewards of all they accomplished within that past year. Reflecting both this passage of time and their dedication to improvement, appearances have been slightly altered. Better yet, production values are a step up from Grande Road, where awkward, hastily drawn faces were prevalent in non-key scenes. 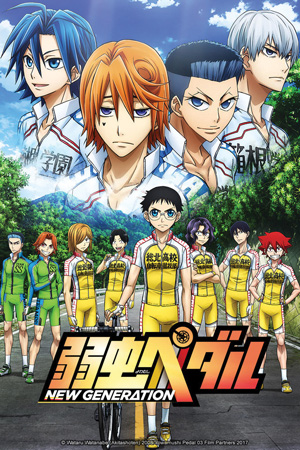 Has New Generation met its challenge and come out victorious? That remains to be seen, as even now, it continues its planned 25-episode run. But it’s off to an excellent start, offering a Yowamushi Pedal experience that is both nostalgic and fresh. Those who are uninitiated, make no mistake, New Generation is unequivocally a continuation of prior seasons and should not be entertained as an entry point to Yowamushi Pedal, but it’s a series that continues to maintain its quality and is well worth the time investment to catch up. Existing fans, you know the drill. Saddle up!

This story appears in the August 2017 issue of Otaku USA Magazine. Click here to get a print copy.