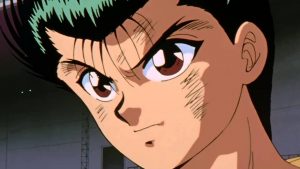 The celebration continues for the 25th anniversary of the Yu Yu Hakusho anime, based on the manga by Yoshihiro Togashi. An aspect of the anniversary project includes the rebroadcast of various Dark Tournament Saga episodes on Japanese TV, and one of them will even feature audio commentary from the cast.

The highly popular episode 55, “Bakuretsu! Mezameta Youko” or “The Beast Within,” is set to air on Tokyo MX on August 20 with a newly-recorded commentary. Cast members participating include Megumi Ogata (Kurama), Ryo Horikawa (Karasu), and Shigeru Nakahara (Youko Kurama).

While we’re on the topic of great OPs, the latest promo for the Yu Yu Hakusho 25th anniversary Blu-ray sets features the anime’s catchy opening.