None of the zombies of Zombie Land Saga have a heartbeat, but they certainly have a lot of heart 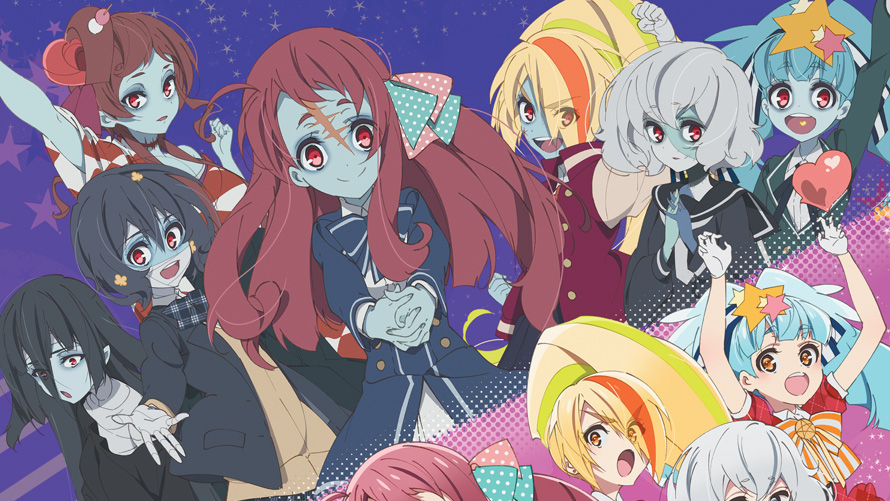 Sakura Minamoto just had the worst day of her life. One minute she’s on her way to submit her application to be an idol singer, and then the next her life crashes to a halt thanks to a speeding truck. Next thing she knows she’s in an abandoned mansion running for her dear life from ravenous zombies. Of course, her hopes for survival fly out the window when she learns that she, too, has become a zombie (and that she’s been dead for 10 years). All the zombies in this mansion have been gathered by the mysterious shades-wearing stranger Kotaro Tatsumi, who informs her that she and the other zombies will help him save Saga Prefecture from fading into obscurity. But how are a bunch of zombies going to pull off something like that?

Why, by becoming the regional, all-zombie idol group Franchouchou, of course!

Ladies and gentlemen, welcome to MAPPA’s Zombie Land Saga, a 2018 fall original anime that breathes some fresh air into two practically decaying genres—zombie horror and the trials and tribulations of aspiring idols. That may sound ridiculous, but this show has certainly committed itself to being the most absurd thing you’ve ever seen. Up until its premiere, everyone (myself included) was expecting a run-of-a-mill zombie apocalypse series thanks to all of the vague promotional materials. All of these ads, plainly and simply, tricked us. What we got instead is a huge contender for what I can only describe, in a good way, as “organized chaos.” 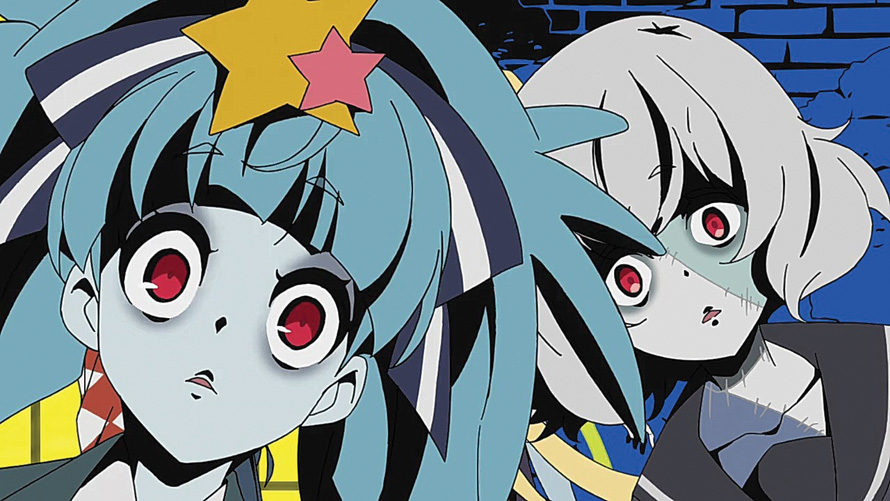 Zombie Land Saga, from start to finish, is an idol show: you have a group of zombiefied girls from different backgrounds—in this case, time periods—that have to learn to work together to make it big as regional idols. In the Franchouchou group, we have normal schoolgirl/fangirl Sakura (we’ve seen her kind in countless idol shows before), 1990s delinquent biker Saki Nikaido, former idol group leader Ai Mizuno, Showa-era idol Junko Konno, Meiji Restoration courtesan Yugiri, transgender child actress Lily Hoshikawa—I’ll get to her in a moment—and, of course, the LEGENDARY TAE YAMADA. Of these girls, Ai and Junko are the only two with actual idol experience, with Junko hailing from the 80s. Yugiri is now in a Japan 150 years in the future but rolls with the punches anyway. And Tae is the only one of the girls who has yet to regain her human consciousness.

By the way, no explanations are given for their predicament, and none are deemed necessary. How did they become zombies? Have you ever seen a zombie movie? There’s your answer. Why these specific girls? Because they’re legends! Why an idol group? To save Saga! Why is Tae Yamada a legend? Because she’s the LEGENDARY TAE YAMADA! Even as the plot comes to life, the show refuses to hold your hand, like someone pushing you out of a plane without giving you a parachute! And honestly, Zombie Land Saga deserves points for getting its story across in such a bold manner. Not only that, it also has a strong follow-through, particularly due to leaning more toward the “comedy” in “horror comedy” (though there are moments in which the “horror” aspect is exquisite to watch). It displays a good understanding of the visual language of zombie films regularly, and many surprisingly regular problems the girls face are a major source for hilarious slapstick bits thanks to their undead attributes, whether said attributes help them out or not. 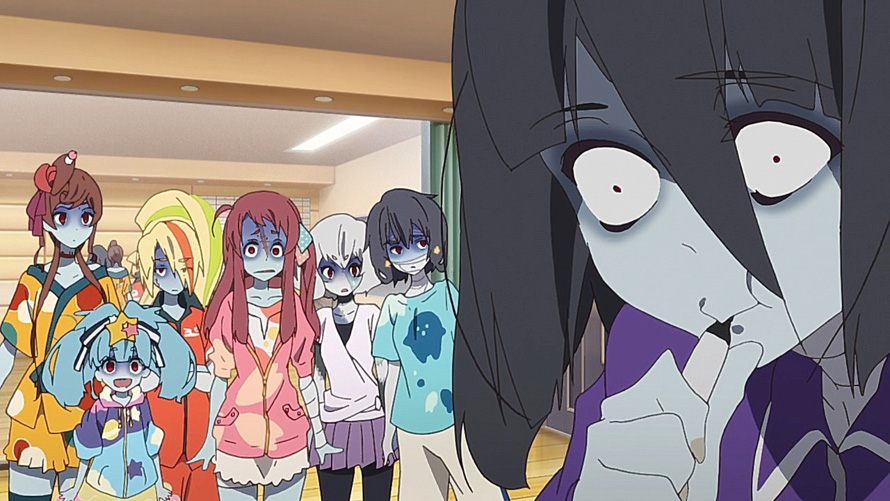 It also helps that Franchouchou has a colorful cast of characters with well-defined personalities. Of course, you can’t talk about this show without discussing two particular characters, the first being our glorious producer Kotaro, gorgeous screaming and all, thanks primarily to the amazing voice acting of Mamoru Miyano. His range as an actor should come as no surprise (Light Yagami and Tamaki Suoh, anyone?), but you can tell he’s having a blast with this one. To him, an all-zombie idol group is nothing outlandish, and setting up their first gig at a death metal concert seems perfectly sensible. And in his mind, “A zombie that doesn’t dance is just a regular zombie.” His character has no connection (that we know of) to reality, and this makes him the perfect mascot to the show’s crazed antics.

And then there’s Lily, who managed surprise a lot of people with the reveal that she was a transgender girl. Transgender representation is pretty hard to find in anime, and comedies don’t exactly have the best record of dealing with transgender characters properly. So you can imagine my surprise with how solid Zombie Land Saga was with respecting Lily’s identity. She used to be called Masao, but she only answers to Lily now. Your mileage may depend on if her death was comedy that works within the show’s weirdness (a humorously exaggerated take, if you will) or if it unintentionally trivializes gender dysphoria. I don’t have the credentials to really dive into this topic, but this specific portrayal certainly deserves praise for being kind and unrestrained with its reveal. Who would’ve thought a zombie show would take deadnaming seriously?

I’d add the LEGENDARY TAE YAMADA to this list, but honestly, does someone so LEGENDARY really need an explanation? (She’s voiced by Saga-born Kotono Mitsuishi. Sailor Moon herself, people!) 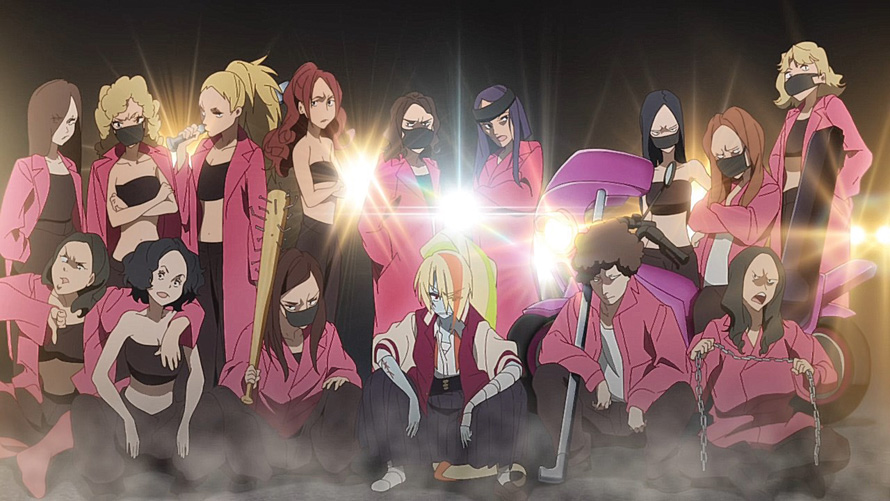 Ironically, for an show featuring the undead, Zombie Land Saga is a lively piece of work, primarily because it’s doing so many different things. Sometimes it makes fun of the most common idol conventions; other times it plays them completely straight. Sometimes the girls’ undead attributes are utilized for ridiculous humor; but other times you have these moments when you completely forget that they’re zombies. The show never becomes a straight-up parody, despite all the humor it throws at you. At the same time, despite its premise (“idols that’ll never get exhausted”), it never becomes a fully realized satire; yet it has an acute awareness of how the idol industry is simultaneously a fulfilling experience and a business trying to sell you a product. Still, the show doesn’t really dive into that idol-examining potential other than a strong jab here and there; it’s clear that the show is out to be a horror-comedy-idol story rather than a deep critique of the idol industry model. Zombie Land Saga knows what it wants to be, but that doesn’t stop it from being sincere with what it’s showing off.

Zombie Land Saga feels like it could fall apart at any moment, since we’re seeing so many different moods and themes dancing across the screen. And yet, stitching behind-the-scenes idol drama, colorful character chemistry, quirky songs, and zombie shenanigans together seems to have made this show a Frankenstein’s monster of a fun time. It manages to straddle multiple personalities without losing its own unified character. Even if you’re not an idol anime person, this particular show has a unique charm that can hypnotize even the most defiant naysayer. Maybe it’s its well-formed personalities (some more LEGENDARY than others) and how they clash against each other, or maybe it’s just a really funny show. Either way, there’s no denying that Zombie Land Saga is an engaging season of undead antics that could give Michael Jackson a run for his money. And with the way the show ended, I doubt we haven’t seen the last of our lovable leading ladies (I mean, they didn’t even save Saga yet!). After all, the SAGA must go on!

Zombie Land Saga is available from Crunchyroll and Funimation.